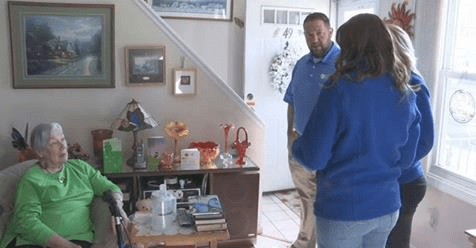 Our very own Matthew Butterfield was excited to be part of the Surprise Squad on the Western Mass news channel. He worked with the team to provide Sandra Dudek a stairlift, so she could access her entire home.

A medical condition threatened to force a Chicopee woman out of the home she’s lived in for the past 30 years.

After learning about her situation, the Western Mass News and Lia Auto Group Surprise Squad decided to step in.

After seeing her sister go through her fair share of emotional struggles, Cynthia Sayre wants nothing more than for Sandra to be happy in the place she’s always called home.

“Sandra Dudek is my only sibling. In her 76 years, she’s run into many difficulties like losing her dear husband, her only child, and now she has spinal stenosis,” said Sayre.

As Sandra becomes less mobile she may need to move out of her two-story house which holds her final memories of her husband and son.

“I lost my husband 18 years ago and I lost my son two years ago, and it was beautiful here. I mean this is home,” said Dudek.

Dudek’s home that has become difficult to get around since she’s had some serious surgeries.

“I had one in the front where they replaced some of the discs and they had to go in through the back and do it again,” Dudek noted.

It’s also been hard on her sister Cynthia, who lives 45 minutes away, along with her next door neighbors.

The Western Mass News and Lia Auto Group Surprise Squad, along with Matthew Butterfield with NSM in Chicopee was able to gift Sandra with a brand new stair lift.

What would usually take Sandra five to ten minutes, will now only take seconds.

Want to join the discussion?
Feel free to contribute!

Preparing to Age in Your Own Home
Scroll to top